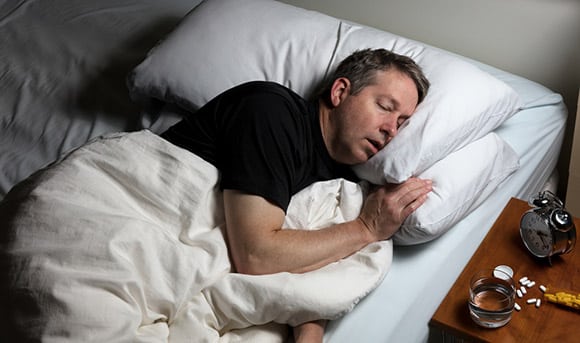 WHAT IS SLEEP APNEA?

Sleep Apnea is a common sleep-disordered breathing condition characterized by repetitive start and stop breathing disturbances during sleep. Affecting approximately 24% of men and 9% of women, it remains largely undiagnosed.

Lack of awareness, lack of screening, and sufferers normalizing their abnormal day and night-time symptoms are sadly the common reasons why sufferers go under the radar and spend their daily lives suffering a decline in general health and wellbeing, suffering relationship stress, and are at high risk of developing medical complications.

Good news is this sleep disorder a treatable condition and can be easily tested for in one sleep night.

What is an Apnea?

An apnea is a cessation of breath that lasts for 10 seconds or longer. There are 2 types of apneas, open and closed apneas.  Open apneas are linked to a signal failure between the brain and the breathing muscles, the airway is, therefore, free of a physical obstruction. While a closed apnea results from the airway becoming obstructed by the relaxation of soft tissues and tongue muscle in the throat area, it’s normal to hear the audible sound of snoring prior to the occurrence of a closed obstructed apnea.

WHAT ARE THE 3 DIFFERENT TYPES OF SLEEP APNEA?

The most common of the 3 types of sleep apnea remains largely undiagnosed and untreated yet is alarmingly linked to many of today’s serious medical conditions.

During sleep breathing repeatedly starts and stops becasue the airway becomes obstructed when tissues and muscles in the throat area relax blocking the passage of air.

Snoring is a classic night-time symptom occurring when the soft tissues begin vibrating in the airway. Snoring indicates airway instability and is typically reported by family, friends, and neighbours!

Approximately 1 in 4 men suffer from OSA [1]

50% of snorers are found to have OSA. If you snore get tested to find out if you are at risk.

Disrupted sleep quality can manifest into a range of symptoms including but not limited to daytime tiredness, lack of energy, appetite changes, weight gain, mood changes, low libido, short-term memory loss, heart palpitations, and so much more.

Sleep deprivation and sleep debt accumulate over time further exacerbating symptoms and increasing the risk of developing other health diseases.

It’s important to note that not all symptoms are easily identifiable as a cause result of obstructive sleep apnea (OSA) making it one of the reasons why OSA easily goes under the radar and untreated.

Don’t stay at risk. Avoid becoming a statistic. Simply get your sleep tested to find out.

Referred to as CSA by sleep practitioners, central sleep apnea (CSA), differs from obstructive sleep apnea whereby the pause in breathing is caused by a lack of signal from the brain to the breathing control muscles versus a physical obstruction in the airway.

In other words, the airway does not obstruct with central sleep apnea, the stoppage of breath is rather a communication disconnect between the brain and the muscles involved in breathing.

Snoring is therefore not a common symptom.

Your health practitioner may request further tests to determine the underlying cause. Treatment for CSA differs from OSA.

Opioid medications, high altitudes, heart failure, and stroke can be the underlying cause for CSA.

Science and medical professionals are still learning about this phenomenon and therefore don’t have all the answers at this point in time, but what they do know is that a person exhibits both OSA and CSA events.

One night of sleep gives enough data to find out if you are a sufferer of sleep apnea. Spoilt for choice you can either test at home in your own bed or in a hospital sleep lab setting. Once upon a time hospital labs were the only option with long waiting lists, but fast forward to the past decade and home testing is now the preferred choice when testing for suspected obstructive sleep apnea.

Sleep in the comfort of your own bed and in your normal sleep surroundings made possible by the availability of advanced medical technology equipment. The sleep testing device is ambulatory and battery-operated thus allowing the person to freely get up to go to the toilet during sleep should this be required.

Should a person prefer to be supervised in a clinical environment, a sleep scientist monitors equipment and signals throughout the night. Typically in a laboratory setting the person is attached to non-ambulatory equipment, thus requiring assistance to disconnect should they need to go to the toilet during the test.  Due to the clinical environment the person may experience differing sleep and wake times compared to their normal set up at home.

HOW IS THE SEVERITY OF SLEEP APNEA CATEGORIZED?

A sleep apnea test determines the severity of sleep apnea.  Using scoring criteria of mild, moderate, and severe the accompanying sleep report will document how many breathing disturbances occur per hour while asleep.

The severity of the apnea diagnosis can come as a surprise and for some a shock revelation.

It is normal to experience up to a total of 5 apneas and hypopnoeas events per hour without being diagnosed with sleep apnea. An apnea event is another term used to describe stoppage of breath (no breath) and hypopnea is a partial reduction in airflow. See the below examples showing airflow restriction as the airway obstructs?

Sleep physicians will also diagnose mild-moderate and moderate-severe when taking into consideration other parameters tested such as oxygen desaturations levels.

DOES THE SEVERITY OF SLEEP APNEA MATTER?

WHAT CAN A SLEEP REPORT TELL ME?

The sleep physician reporting on the sleep test may also diagnose a test result as mild-moderate or moderate-severe sleep apnea taking into consideration other test findings.

In conjunction with prescriptive MedTech treatment recommendations, the sleep physician may also recommend weight loss to assist with reducing the severity or number of apnea events per hour.  Click to learn more about BMI, neck size, and weight factors impact for sleep apnea.

HOW DOES THE AIRWAY OCCLUDE AND REOPEN?

The airway patency changes between open and clear to progressively narrowing to the point of apnea or in other words a cessation of breath.

Snoring for some can be loud enough that it can be heard throughout the home and by neighbors. At this particular point, the person might begin experiencing a hypopnea event, impacting oxygen levels and thus lowering the amount of available oxygen.

Snoring is a strong indicator of airway instability.

Should the obstruction continue to worsen, an apnea event is likely to occur forcing cessation of airflow.  The body will continue trying to breathe against the blocked airway because the brain is signaling to breathe as per normal.

Though the breathing effort against a blocked airway causes pressure to build up in the intrathoracic chest cavity.   At the same time, oxygen levels decrease, and carbon dioxide levels increase.

In an effort to clear the airway and restore oxygen and carbon dioxide levels to normal limits the brain initiates an arousal to wake the person just enough to breathe.

This clears the obstructed airway and in the process fragments sleep architecture thus affecting the quality of sleep. Typically the person will have no recollection of the arousal continuing to sleep through it unless, of course, the person wakes up choking or gasping for breath as they clear the airway. Disrupting the current stage of sleep, the arousal will move the person into a lighter stage of sleep, causing sleep fragmentation and in most cases reducing the amount of time spent in REM, the deep restorative stage of sleep.

IS IT DANGEROUS TO STOP BREATHING WHILE SLEEPING?

When you suffer from sleep apnea your body sends alert signals to warn that oxygen levels are low and carbon dioxide levels are raised. Your body transmits an arousal signal to rouse and wake enough from sleep. Unfortunately this disrupts the quality of sleep but helps clears the airway to breathe. More than likely a snorting gasping sound occurs as the airway clears.

Many sleep apnea sufferers lack awareness of the physiological stress that the body endures as a result of each disrupted breath. Each night this causes progressive and accumlative damage, elevating the risk and likelihood for developing some of today’s serious chronic disease conditions.

It’s not uncommon to hear newly diagnosed and also those new to treatment report a sense of relief simply by finding out the reason behind their symptoms or underlying medical conditions. It’s also common to hear stories from those who are deeply frustrated because it took so long to find out that they were a sufferer and disappointed to realise that their untreated sleep apnea is a likely attributing factor for the decline in their health and wellbeing.

If you feel you’re at risk get tested to confirm either way.

WHAT ARE THE WARNING SIGNS OF SLEEP APNEA?

While there is an extensive list of daytime and night-time symptoms connected to sleep apnea many of the symptoms can easily be dismissed, ignored or mistaken for a different reason.

The 4 most common symptoms are snoring, daytime sleepiness or  tiredness, impaired cognitive function to include short-term memory loss; inattentiveness and difficulty concentrating, and feeling more irritabile.

The longer a person suffers from untreated obstructive sleep apnea there is a greater likelihood of experiencing more pronounced symptoms and suffering from an increased number of symptoms as the body begins to compensate in response to the sleep-disordered breathing issues.

It’s important to note that each category of severity (mild, moderate and severe) can suffer from any number of symptoms.