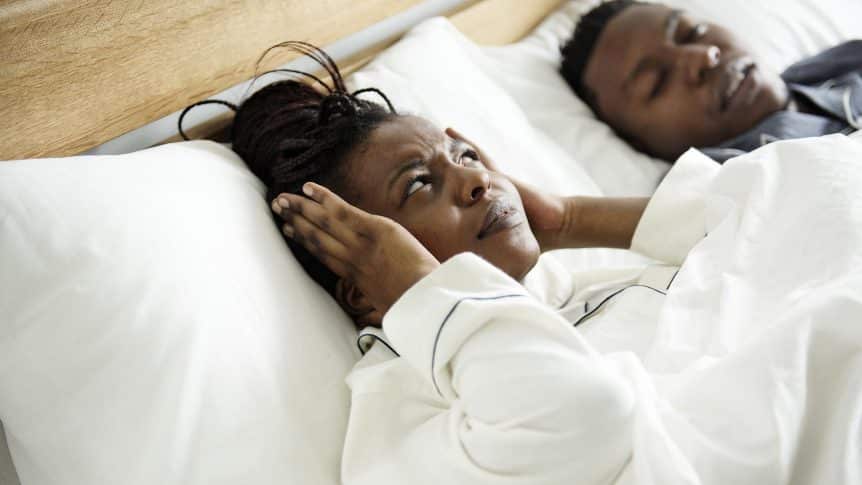 Snoring is often the subject of cartoons and jokes, usually featuring a stereotypical man snoring away while his partner is wide awake, covering her ears with pillows (or thinking about ways to wake him up!). You can even listen on Spotify to ‘Dave Don’t Snore’, a song created around a recording of real-life snoring.

But snoring is no laughing matter. Someone sharing a bed (or even a house) with a snorer can lose significant sleep and find themselves understandably frustrated and angry. And, for the snorer themself, their night time sounds can be an indication of sleep apnea, a potentially serious disorder.

Let’s delve into the difference between snoring and sleep apnea as well as tests and treatments that are available.

Why do some people snore?

Snoring is the sound created when parts of your throat vibrate as you breathe. It’s a bit like a musical instrument – just not one that’s in tune.

The main part of your throat that vibrates is called the pharynx, which sits behind the tongue at the back of the throat, that’s open to both air as we breathe and food that we eat. The pharynx, which is often referred to simply as ‘the airway’ is also important in speech and singing, which is perhaps why snoring can get so loud and varies in pitch and tone from person to person.

Snoring only happens when you sleep, because this is when our bodies are relaxed. As the muscles around the throat relax and soften, the pharynx is less strongly held in place, allowing it to vibrate as air passes in and out. Think of a windchime with the metal bars held still versus when it’s left loose in the breeze.

Lots of people like to think they never snore but the truth is that almost everyone snores occasionally, perhaps when they’re unwell with a respiratory illness or really fatigued. According to the Sleep Health Foundation, around 40 percent of adult men snore regularly, including 15 percent who snore most nights..

There are various reasons for snoring. Snoring is more common in men but women are more likely to snore during pregnancy and after menopause. As a general rule, snoring becomes more common and more severe as we age (though younger people, including children can snore, too).

Other reasons for snoring include being overweight. This is because excess weight around the neck makes it harder for the little muscles of the throat to hold the pharynx in place as we sleep. Most people are more likely to snore when they’ve drunk alcohol and when they sleep lying on their back.

How is snoring connected with sleep apnea?

Snoring is a key symptom of sleep apnea, a potentially serious sleep disorder.

In sleep apnea, breathing is reduced and may actually stop. This is caused by the same part of the throat – the pharynx – completely closing. This obstructs the breathing and you can stop breathing for anywhere from a couple of seconds to a minute or more.

Not breathing is obviously bad news. Even though you’re asleep, your body notices the resulting drop in oxygen levels in the blood and responds by briefly waking you up so that the muscles become less soft and you can breathe freely again.

However, even if you don’t notice this process consciously, waking up many times a night – even if only for a couple of seconds – means that you’re not getting the rest you need. As a result, you wake up unrefreshed and you may struggle to stay awake during the day.

Can you have sleep apnea without snoring?

Though snoring is a common symptom of sleep apnea, not everyone with sleep apnea snores.

‘Central sleep apnea’ happens when the breathing pauses are caused by a brain-muscle connection fault rather than obstruction in the throat. So snoring won’t happen (though you’ll likely still hear the gasping for air during sleep). While breathing has paused, there is briefly no sound, then this is followed by a brief gasping or choking sound that happens as the brain wakes up enough to make the body take a deep breath. For these people, snoring is a symptom of sleep apnea.

Conversely, not everyone who snores has sleep apnea. If your pharynx is vibrating enough to cause a snore but not so much that your throat closes completely, you do not have sleep apnea.

However, for many people, snoring is part of their sleep apnea. Snoring happens as the airway narrows and then an ‘apnea’ – a pause in breathing – happens immediately afterwards, completely closing the airway.

How can you tell whether it’s ‘just’ snoring or sleep apnea?

Let’s summarise the difference between snoring and sleep apnea. If someone both snores and makes a gasping or choking sound during sleep, it’s likely they have sleep apnea instead of simple snoring.

Other indications of having sleep apnea are daytime sleepiness and feeling tired on waking, even after a night where you’ve been in bed for eight hours or more.

Being tested is important because sleep apnea is associated with other health problems, like high blood pressure, heart problems, diabetes and depression. Sleepiness can lead to other problems ranging from reduced productivity to car or workplace accidents.

The only way to definitely decide whether someone is ‘just’ snoring or has sleep apnea is to have a sleep apnea test, which can be as simple as wearing a device around your wrist, like a watch, for one night in your own bed.

To find out more about your options for at home sleep apnea tests, see our article titled: Best Sleep Apnea Tests at Home in Australia.

What can be done to treat snoring and sleep apnea?

Both snoring and sleep apnea can be improved by lifestyle changes, such as losing weight, reducing alcohol intake (especially in the hours before bedtime) and avoiding or treating any allergies that seem to make snoring worse.

In addition to lifestyle changes, there are a range of treatments that can be prescribed for sleep apnea, including CPAP (Continuous Positive Airway Pressure), which is a device worn as a mask that uses a flow of air to keep your airway from closing.

Snoring can also be treated, even when it is not a sign of sleep apnea. It’s worth investigating options especially if others in your family or household are kept awake because of your snoring. Options include a mandibular splint, which is worn like a mouthguard to push your lower jaw forward in order to widen your airway. Surgery is also an option for some.

In summary, if you snore, it is worth being assessed for sleep apnea and then considering lifestyle changes and prescribed treatments in order to get a better night’s sleep for you and your loved ones.